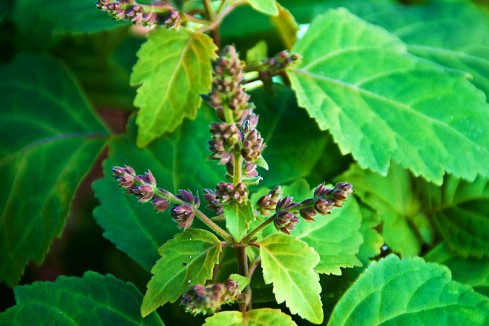 Patchouli is an ingredient used since ancient times. It was formerly used by silk merchants who wrapped fabrics in dried patchouli leaves. Being delicate fabrics that traveled from one country to another, they were scented with this plant. This made the smell of Patchouli linked with luxury and high quality. Patchouli in turn acted as an insect repellent, preventing moths from eating the fabrics.

The smell of Patchouli, although it was opening up to other fields such as cosmetics or natural medicine, it was in the middle of the 20th century when its use in the perfumery sector became popular. From that moment on, it became a common olfactory note in many perfumes.

What's so special about Patchouli scent?

Patchouli oil is made up of patchoulol, which makes this scent woody, woody, and earthy. It is usually categorized as an exotic and oriental aroma, due to its aroma and the origin of its use, which is Indonesia. Patchouli has a high capacity to fix the aroma on the skin, so its fragrance is longer lasting. Hence its high valuation in the perfumery sector. It offers body and personality, richness and complexity to perfumes, and combines perfectly with other floral oils, achieving a sweet and enveloping aroma in its fusion.

Perfumes that contain Patchouli in their composition

Patchouli is present in a wide variety of perfumes on the market. This olfactory note is found in both male and female perfumes, specifically, patchouli perfumes are very widespread among female fragrances. It belongs to the woody olfactory family, which gives a great personality to perfumes.

When a perfume smells of patchouli, we can define it as a woody, earthy aroma with very soft nuances of cocoa and tobacco. One of the advantages of using patchouli as an olfactory note in perfumes is that, unlike other essential oils, it improves over time. As time goes by, the aroma it gives off is softer and with a variety of nuances. In VismarEssence you can find Patchouli 305 perfume, to check all these incredible olfactory characteristics. Other examples of perfumes that contain Patchouli in their scent notes are:

Patchouli has many very positive properties, which is why it is such a highly valued fragrance in perfumery. This type of aroma is widely used in aromatherapy sessions, as it helps to improve mood and calm anxiety.

In addition, its strongest point is its ability to naturally fix the aroma, which is why it is one of the most important base notes of the olfactory pyramid. These sheets provide body and personality to the products in which they are used. In addition, they play an important role in complementing the hints of woody and floral fragrances.

Save products on your wishlist to buy them later or share with your friends.

This website uses cookies to improve your experience. We'll assume you're ok with this, but you can opt-out if you wish